One Dead At Osun Festival Celebration 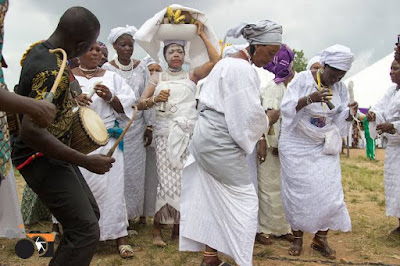 A yet-to-be-identified man has been confirmed dead by the police, while another one was fatally injured in an accident that occurred at the celebration of Osun festival at Ido Osun town, Osun State.The punch learnt that the death happened when some youths bearing dangerous weapons stormed Ido Osun from Osogbo on motorcycles, rode recklessly and involved in an accident.The two victims in the accident that happened around 8:00pm on Saturday rode different motorcycles and had head-on collision.It was further learnt that apart from the man that died in the accident, the injured victim had been rushed to Ladoke Akintola University of Technology Teaching Hospital, Osogbo.The Osun Police Public Relations Officer, Yemisi Opalola, while speaking to our correspondent on Sunday, said the remains of the deceased had been deposited at the morgue of LAUTECH Teaching Hospital, Osogbo.She said, “Some youths armed with dangerous weapons, riding recklessly on motorcycles arrived Ido Osun from Osogbo to celebrate Ido Osun festival. “Consequently, two of the riders had head-on collision and were rushed to LAUTECH Teaching Hospital, Osogbo, where one of them was certified dead and deposited at the morgue.“The second victim was receiving treatment at the Intensive Care Unit of the hospital. The two motorcycles involved in the accident had been recovered for further investigation.”