Video: Melania Trump Pulls Her Hand Away From Donald Trump's As They Step Off Air Force One 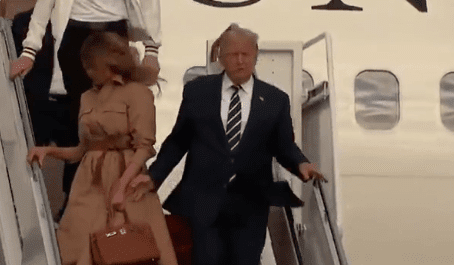 A video has shown Melania Trump appearing to refuse to hold President Trump's hand as they stepped off Air Force One.Footage, which has been widely shared online, shows the First Lady, 50, navigating the steps from the presidential aircraft in high heels while trying to hold her dress down in windy conditions.However, many on social suggested she was giving her 74-year-old husband the cold shoulder as she moved her arm away when he tried to grab hold of it.The US president appeared to make a second attempt before finally placing his right hand on her lower back.Twitter users had mixed opinions on the couple's body language, with one person writing: "Nope. She doesn't want him touching her."Another said: "Or she's trying to keep her dress down from wind. But you keep doing you."The couple, who were travelling with their 14-year-old son, Barron, had arrived at Joint Base Andrews in Washington DC after flying in from New Jersey.