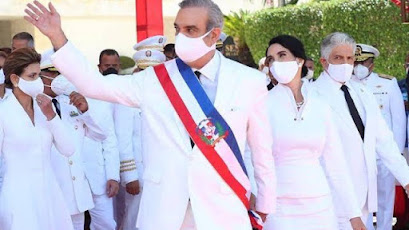 The Dominican Republic on Sunday sworn in Luis Abinader as the new president ending 16 years of rule by the Dominican Liberation Party (PLD).The candidate of the Modern Revolutionary Party (PRM) convincingly defeated the PLD candidate, former public works and communications minister Gonzalo Castillo, in the July poll.The 52-year-old entrepreneur had previously lost a 2016 bid for the presidency and has no previous experience in public office.He campaigned on promises of modernisation, fighting corruption and crime as well as creating jobs.“We are living one of the most difficult moments of our history,” Abinader said in his inaugural speech in Santo Domingo, which was attended by U.S. Secretary of State Mike Pompeo, as he said he would lead a government of “unlimited dialogue.”The elections were described as the first in Latin America since the beginning of the coronavirus pandemic, which overshadowed campaigning and the vote itself.Abinader, who at one point tested positive for the coronavirus, had focused on promises to revive the economy during the campaign.He replaces Danilo Medina, whom the constitution barred from seeking a third term and who presided over high economic growth rates – an average of more than 6 percent annually between 2014 and 2018 – before the pandemic hit.However, the government’s popularity was dented by corruption allegations, internal divisions within the PLD, and Medina’s previous attempts to seek an unconstitutional third term in office.The country of 11 million people, which shares Hispaniola island with Haiti, has confirmed more than 86,000 novel coronavirus cases and more than 1,450 deaths.