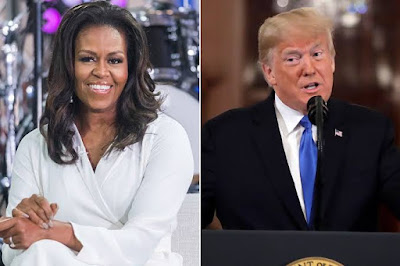 Former first lady Michelle Obama launched a scathing attack on President Donald Trump on the first night of the Democratic National Convention on Monday.The former first lady said Trump is a “wrong president” who displays an “utter lack of empathy.”“Whenever we look to this White House for some leadership, or consolation, or any semblance of steadiness, what we get instead is chaos, division and a total and utter lack of empathy.“Let me be as honest and clear as I possibly can: Donald Trump is the wrong president for our country,” the wife of former President Barack Obama said in a blunt rejection of the Trump administration.“So if you take one thing from my words tonight, it is this: if you think things cannot possibly get worse, trust me, they can; and they will if we don’t make a change in this election. If we have any hope of ending this chaos, we have got to vote for Joe Biden like our lives depend on it,” she added.Earlier, ex-President Barack Obama said Joe Biden made a brilliant choice of Senator Kamala Harris as a running mate in this year’s United States Presidential Election scheduled to hold in November.Obama said, “When you’re in the Oval Office, weighing the toughest issues, and the choice you make will affect the lives and livelihoods of the entire country – you need someone with you who’s got the judgment and the character to make the right call. Someone whose focus goes beyond self-interest to consider the lives and prospects of others.“Joe Biden nailed this decision. By choosing Senator Kamala Harris as America’s next vice president, he’s underscored his own judgment and character. Reality shows us that these attributes are not optional in a president. They’re requirements of the job. And now Joe has an ideal partner to help him tackle the very real challenges America faces right now and in the years ahead.“I’ve known Senator Harris for a long time. She is more than prepared for the job. She’s spent her career defending our Constitution and fighting for folks who need a fair shake.“Her own life story is one that I and so many others can see ourselves in: a story that says that no matter where you come from, what you look like, how you worship, or who you love, there’s a place for you here.“It’s a fundamentally American perspective, one that’s led us out of the hardest times before. And it’s a perspective we can all rally behind right now.“Michelle and I couldn’t be more thrilled for Kamala, Doug, Cole, and Ella. This is a good day for our country. Now let’s go win this thing.”