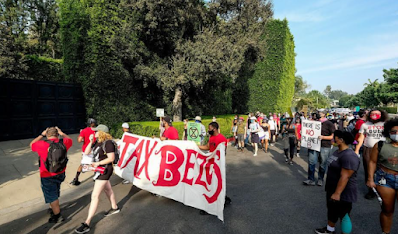 Mad oh! Protesters marched to Amazon CEO Jeff Bezos' palatial Beverly Hills mansion to demand the company address environmental and labor issues that came to a head during the pandemic.

A coalition of labor and environmental activists gathered at Will Rogers Memorial Park on Sunset Boulevard to decry Bezos and his multi-billion dollar e-commerce empire during 'The Wrong Amazon is Burning' event.

The Congress and Essential Workers, a group of current and former Amazon warehouse employees, organized the rally and it was spearheaded by Chris Smalls of Staten Island, New York.

Smalls, a former Amazon warehouse staffer, was fired from his position in March after he organized a protest over what he described as a lack of PPE and hazard pay amid the coronavirus pandemic. 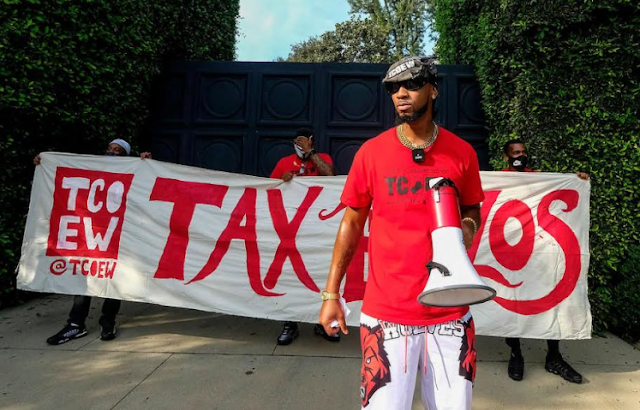 'We demand that Jeff Bezos and the rest of the billionaire class pay their fair share to deal with the climate crisis,' TCOEW said in a statement.

'We are calling for a decent living wage of $30/hour minimum for all Amazon employees, Medicare and childcare for all, and the right to unionize without fear of retaliation. These are just a few of the issues that we feel billionaires like Jeff Bezos, who makes nearly $4,000 a second, can absolutely help relieve or resolve.' 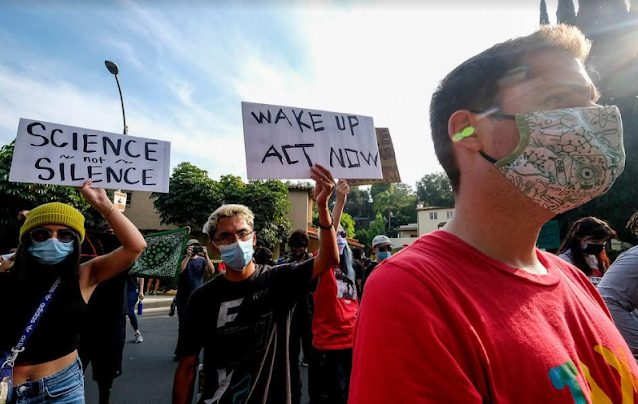 The crowd of demonstrators who shouted 'f*** Bezos,' who's worth $185billion, were joined by climate activist groups Sunrise Movement and Extinction Rebellion.

Demonstrators who donned face masks hoisted signs that read 'f*** Bezos,' 'your greed is killing us,' 'abolish billionaires' and 'share with your country!'

Other signs urged Bezos to consider environmental changes, including one that said 'there is no planet B' and 'science not silence.'

At one point, members of the artivist troupe, Red Rebel Brigade Manifesto, wore red ensembles during a performative piece aimed at highlighting the global environmental crisis. 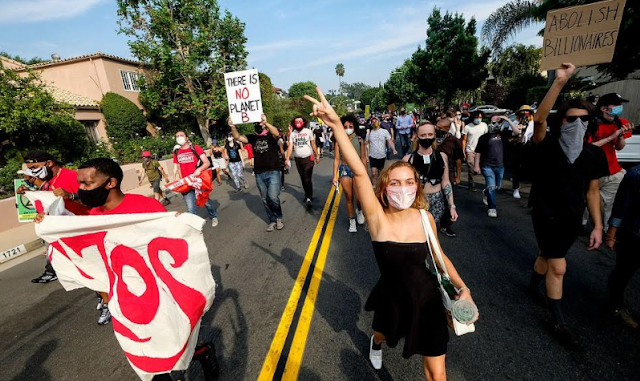 As the group of determined protesters drew near Bezos' mansion, they chanted 'tax Bezos' while someone played the drums.

Once the group arrived to Bezos' grand front gate, Smalls used a bullhorn to rally the crowd and declared 'enough is enough.'

After Smalls' dismissal, Amazon officials said he was fired for 'violating social distancing guidelines and putting the safety of others at risk.' 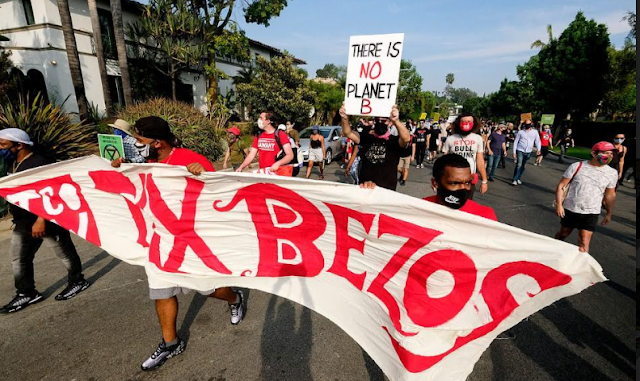 But Smalls asserted that it was retaliation for organizing a workers protest.

The protest came after the recent revelation that nearly 20,000 Amazon workers in the United States have tested positive for COVID-19. And ahead of Amazon's annual Prime Day, in which the company offers discounted sales and lowered prices on various items. 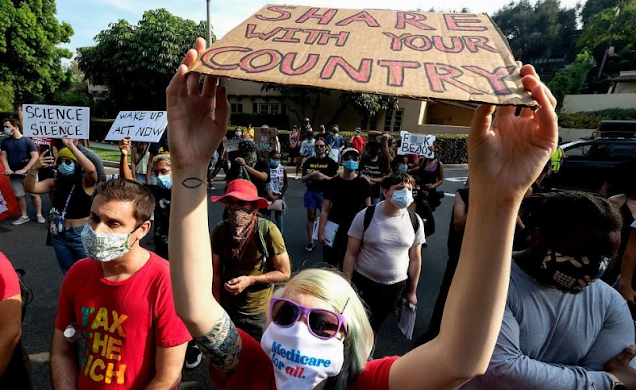 'Employees are not going to be treated fairly and going to have mandatory overtime and have no breaks for the next two months into December,' said Jordan Flowers, an Amazon warehouse worker from Staten Island.

Although Prime Day has been used to highlight consumer perks, it's often a hectic time for warehouse employees who've complained of the overwhelming workload.