''Men Are Now Dying On Trips To Turkey For Teeth Whitening'' 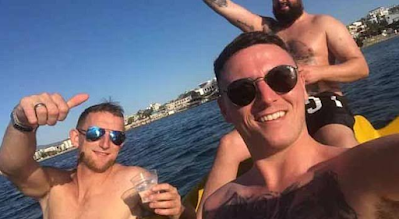 A 33-year-old British man has died and two of his friends are seriously ill in hospital after they collapsed during a trip to Turkey for teeth whitening.

Richard Molloy from Belfast died on Saturday after travelling to Marmaris, Turkey for dental work, while his two friends Declan Carson and Aaron Callaghan were left critically ill.

It remains unclear what caused the DJ's death but it is understood the three men were in Turkey for a teeth whitening procedure.

Mr Carson, a father-of-two, and Mr Callaghan are reportedly in comas but their condition has now improved and they have been taken off of life-support machines.

Police are reportedly trying to trace the dentist who treated the 'three fit and healthy young lads'.

They collapsed in their rented holiday apartment after taking a drug they were given prior to whitening procedure, local reports said.

Turkish media reported one of the men asked for help from the hotel manager.

Investigators have not suggested the dental drug caused Mr Solloy's death and are not ruling out other possible causes.

He said: 'It's a very difficult situation. The young fellow died out in Turkey after travelling with his two friends.

'I understand they had been travelling out for dental treatment, we don't know how it happened but it ended up with Richard dying and the other two lads being seriously ill.

'At this stage his sister has flown out and she's been put in touch with the funeral company who are looking after Richard's repatriation.'