Girl, 16, Left Pregnant After Being R*ped Is Strangled To Death Then Beheaded By Father And Older Brother Because She Would Bring Shame To The Family 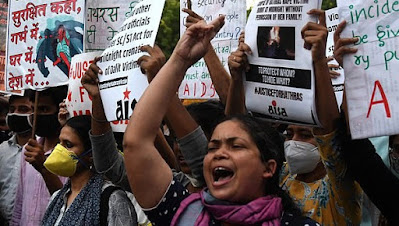 A teenage girl left pregnant after being r*ped was strangled to death by her father who then mutilated her body in an honour killing in India.

The 16-year-old, who has not been named, is thought to have been killed on September 23 when she went missing from a village close to Shahjahanpur, in northern India.

Police believe the girl was beaten and strangled, before her dead body was decapitated and the headless corpse buried in a riverbed.

The case was only brought to light after the body was discovered on Tuesday, because her family did not report her as missing.

After discovering the body, detectives confronted the girl's father who admitted to the crime. Her brother has also been arrested and charged over the murder.

Police told the Times of India that the girl, who stayed with a relative away from her parents' house, had been r*ped and fallen pregnant several months ago.

The girl - who never went to school and was from the lowest Dalit class - hid the pregnancy, which was only discovered by her family after a bump began to show.

Police say the girl's family beat her, ordering her to reveal the name of her attacker, but she ''refused''. She was then killed, and her body mutilated.

'The father has confessed to have killed his daughter because she was pregnant. People had started insulting him publicly,' investigators said.

Detectives are also trying to track down the girl's rapist.