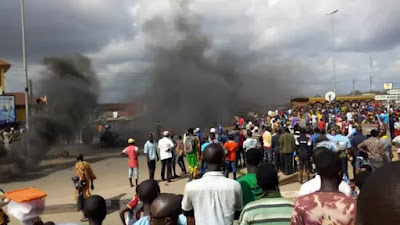 One official of the Nigeria Drug Law Enforcement Agency (NDLEA) has been killed and another injured by a mob in Adamawa State.

Sources said Thursday that Samuel Abba Birma of the Adamawa State Command of the NDLEA was killed and one of his other colleagues badly injured in the attack.

The NDLEA officials had reportedly been on duty, conveying the drug suspects from Michika, a town on the northern tip of Adamawa State, along the Michika-Hong-Gombi-Song axis towards the state capital, Yola, when the drug suspects, on reaching Hong, deceived a milling crowd into a murderous rage.

“The suspects, as they reached Hong, cried out to the hearing of the crowd along the Hong main street, asking to be saved from kidnappers,” a source said.

The source explained that it was a market day in Hong and a sizable crowd was on hand to give the ‘help’ that the suspects said they needed.

“The alarm raised the curiosity of the people, such that although the NDLEA officials made spirited efforts to prove their identity by showing their ID cards, the people descended on the officials, killing one and inflicting machet wounds on another,” the source said, adding that the crowd went ahead and burnt the body of the deceased.

The Adamawa State Commander of the NDLEA, Idris Bello, confirmed the incident, saying some arrests were made in Michika and those arrested were being brought to Yola.

He said a doctor had confirmed the death of one NDLEA officer and admission of one other, who the doctor said was responding to treatment.