#EndSARS: 14 Suspects Arrested Over Killing Of Policeman In Delta 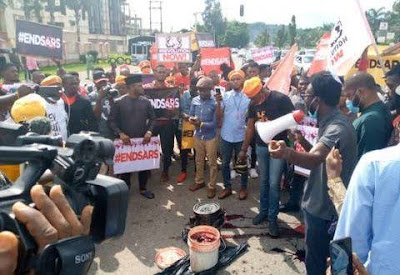 Fourteen suspects linked to Thursday’s Police and #EndSARS protesters clash in Ughelli, Delta, which left a policeman dead have been arrested.

The Delta Police Command confirmed the development to The Nation on Friday evening.

It was gathered policemen in vans drove around the Ughelli metropolis, in the early parts of Friday, combing flashpoints for the “killer protesters.”

The development reportedly caused tension across the town as residents were said to have scampered for safety.

The action was based on a directive by the Inspector General of Police (IGP) that the killers of Corporal Stanley Etaga, be fished out.

#ENDSARS protest turned bloody in Ughelli after a shoot-out reportedly broke out between policemen and protesters, resulting in the death of the Police corporal and hoodlums carting away his arm, AK-47, and ammunition.

A yet-to-be-identified protester also reportedly died in the clash, while a young boy is said to have sustained a bullet wound on the leg.

Sources claim that no fewer than five cars belonging to the suspects were impounded during the operation.

Delta Police Public Relations Officer, DSP Onome Onovwakpoyeya, who confirmed the arrests, added that “they have been charged to court”.