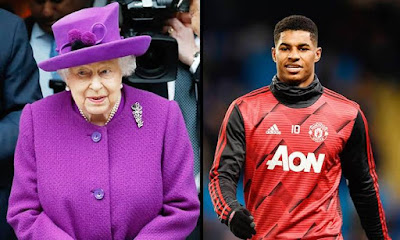 Star footballer turned political activist Marcus Rashford has been honored by Queen Elizabeth II in recognition of his campaign to feed vulnerable children during the coronavirus crisis.

The Manchester United and England striker receives an MBE (Member of the British Empire) in the birthday honors list which was postponed from June to reward key workers and others for their efforts during the Covid-19 pandemic.

Rashford, 22, took the fight to the UK government by campaigning for 1.3 million children to claim free school meal vouchers in England's summer holidays.

The government was originally set to end the scheme, which only runs during the school term, but after crafting a powerful open letter to lawmakers, backed by his use of social media with 2.8 million followers on Twitter, Rashford forced a U-turn.

Rashford, the youngest of five children, said he was "honoured and humbled" by the award, but has vowed to continue his fight to end child poverty with a personal appeal to UK Prime Minister Boris Johnson to extend support.

"This is a very special moment for myself and my family, but particularly my mum who is the real deserving recipient of the honour, Rashford said.

"The fight to protect our most vulnerable children is far from over.

"I would be doing my community, and the families I have met and spoken with, an injustice if I didn't use this opportunity to respectfully urge the Prime Minister to support our children during the October half-term with an extension of the voucher scheme, as the furlough scheme comes to an end and we face increased unemployment.

"Another sticking plaster, but one that will give the parents of millions of children in the UK just one less thing to worry about," he added.

After his initial success in prompting a change in government policy, Rashford continued his campaigning efforts by forming a child food poverty task force, which has forged links with some of the UK's biggest supermarkets and food brands to help tackle the problem.

"Let's stand together in saying that no children in the UK should be going to bed hungry," he said.

"As I have said many times before, no matter your feeling or opinion, not having access to food is never the child's fault."

Rashford was also a prominent voice as the Black Lives Matter campaign gathered momentum in professional sports across the world, taking to social media to express his support.