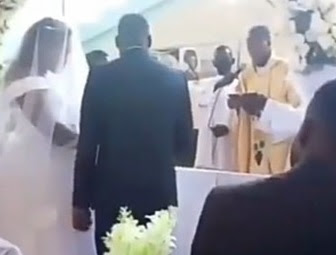 A man identified as Abraham Muyunda of Kabwata Site and Service was caught by his wife marrying another wife, in a Church ceremony.

Mr Muyunda who works for Zambia Revenue Authority at Head Office is married to Caroline Mubita and they have three children between them.

Muyunda left home today in the morning and told his wife that he had gone out of town on duty when, in fact he was set to tie another Knott with another woman.

The wedding took place at a Catholic Church in Chainda.

Mrs Muyunda was only tipped by vigilant neighbours that her husband was about to wed with another woman, after which she rushed to the said Church together with her kids where she interupted the ceremony.

Mr Muyunda looked embarrassed as he kept looking down while his legitimate wife claimed him,in front of the Church and his illegal wife to be.

He has so far been handed over to Matero Police station where he is kept as the family discuses the way forward.

He is likely to be charged with Bigmay which is a criminal matter in Zambia, and when one is convicted , they could face upto 7 years in prison.

The Bride knew Mr Muyunda was married. She is actually the one who sponsored the entire wedding.