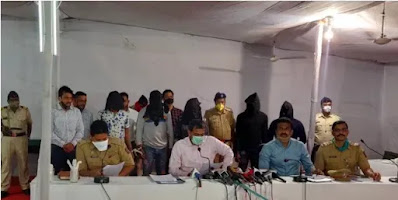 Four Nigerians. and an Indian accomplice have been arrested in New Delhi for online fraud, promising fake jobs abroad or expensive gifts.

Their Indian accomplice was named as Sujeet Dilip Tiwari (25)

The Nigerians were arrested by Nagpur police cyber cell, acting under the petition of a retired Indian army nurse, who was scammed of 41.7 lakh($10,833) in July.

The police claimed the Nigerian gang must have committed frauds worth crores of rupees.

The 56 year-old woman, Reena Samsher Singh, was first befriended on Facebook by one of the accused using a fake profile of an American..

Then the fraudster promised her a lucrative job abroad.

Thereafter, came another promise: to send her gifts and gold jewellery.

To collect the gifts, the victim was asked to deposit money in various bank accounts for `releasing’ the goods from the customs.

She was reportedly threatened by the accused of arrest if she failed to collect the parcel that had arrived at the airport by paying the fees.

According to her, she received WhatsApp messages, threatening to implicate her in a money laundering case if she failed to pay. She thus ended up depositing Rs 41.70 lakh in accounts in Vijaya Bank, Canara Bank, UCO Bank and HDFC Bank.

She later came to know that she had been duped, reported India’s local media.

The cyber cell began investigating the matter by tracking the account numbers provided by the woman. This revealed that the accused were operating from Delhi.

They discovered that the bank accounts belonged to one Sujit Tiwari (25).

He had opened many accounts in various banks in the name of fake companies.

He used to take 5 per cent commission on the amount deposited by the victims and give the remaining amount to the Nigerian gang.

After interrogating Sujit, the team along with another team of Delhi police reached Mohan garden area from where they arrested members of the Nigerian gang.

The gang members are being interrogated to know how many other people they have duped and where the money is kept. Cases under IT Act have been registered against the accused.

The police found Rs 18 lakh in the accounts and seized 18 credit cards and dozens of mobile phones from their possession.