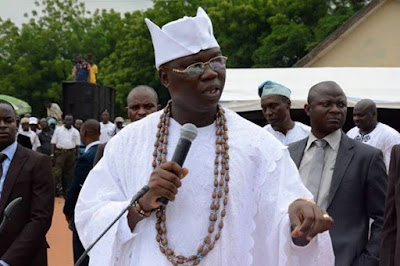 The Aare Onakakanfo of Yorubaland, Gani Adams, has condemned the actions of the Nigeria Police Force over the killing of some protesters across the country.

He said it was the right of the Nigerian youth to express their views against police brutality and the state of the nation.

Speaking against the backdrop of recent protests by youths demanding an immediate end to illegal activities of the now disbanded Special Anti-Robbery Squad, Adams, in a statement by his Special Assistant on Media, Kehinde Aderemi, applauded the Inspector-General of Police, Mr Mohammed Adamu, for the prompt intervention.

Adams, while expressing concern over the killing of some of the protesters in Ogbomoso, Oyo State, Abuja and Lagos, condemned the attack on the palace of the Soun of Ogbomoso, Oba Oyewumi, by some irate youth, urging young people to respect traditional institutions.

He said, “It is most disturbing seeing the number of casualties in the recent protests growing by the day. It is also very unfortunate that some of the bad eggs in the police have become utterly lawless, killing and maiming Nigerians – young and old - for raising their voices against the brutality being perpetrated by the Special Anti-Robbery Squad across the country.

"Those youth protesting are of the digital age, they are the leaders of the future and they are entitled to express their voices and concerns over police brutality and the state of the nation.

"As far as I am concerned, the present situation in the country is a bad signal that Nigeria is heading for a long, protracted crisis. The political, social and economic milieu is suffering from a serious transition. Six years ago, a bag of rice was sold for N7000, now it is close to N40,000. Six years ago, Premium Motor Spirits was less than N100 per litre, but now fuel is sold for over N160. Many of our politicians thrive on rigging, even as the political process has been monetised.

"In the history of our nation, it has never gotten to this level where the entire system is now in comatose. Nigerians have rights to a peaceful protest and it behoves on the Federal Government to listen to the cries of Nigerians over the spate of insecurity, hike in electricity tariffs, and increase in the prices of food commodities resulting in high cost of living.

"For instance, many of these youth protesting are students that have left the universities for over 10 years and are still unemployed.

"With their hopes looking bleak, the youth are frustrated in the present government that has lost the confidence of the people. That is why the protests keep growing daily.

"More importantly, I think we must restructure this country to regionalism, based on federating units or we exit through referendum peacefully without shedding blood. Liberia, Rwanda, Congo and Somalia started like this before they were engulfed in war. There are signals that with all these problems starring us in the face, the FG has provided the room for all these protests and we can only save the nation from imminent collapse if the Federal Government listens to the people."