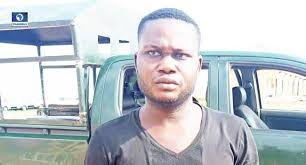 Fachii was arrested by the men of the Four Special Forces Command, Doma Local Government Area of Nasarawa at Katsina-Ala where he was said to be hiding at his girlfriend’s residence.

Parading the suspect, the Commander, Four Special Forces Command, Doma Moundhey Ali Gadzama, assured that the military will continue to be on the trail of other gang members until they are all arrested.

He said that Fachii is the 76th member of the gang apprehended by the military.

Four others, including Gana, have been killed in an operation by the military.

This comes five weeks after Gana was killed by the Special Forces.

According to Major General Gadzama, the ex-Benue militia leader was intercepted on September 8 following a gun duel with the military personnel.

Following Gana’s death, there has been tension in Benue State with prominent personalities including Governor Samuel Ortom and ex-governor Gabriel Suswam accusing the military authorities of killing him when trying to embrace amnesty offered by the state government.