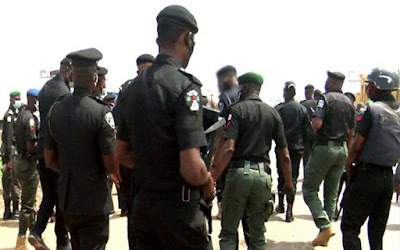 Pandemonium erupted on Wednesday at the disbanded Special Anti Robbery Squad (SARS) office of the Lagos State Police Command when 30 out of the 250 detainees broke out of their cells and escaped.

This was contrary to claims by the state Commissioner of Police, Hakeem Odumosu, that the command had transferred all suspects to the detention facility of the State Criminal and Investigation and Intelligence Department (SCIID), Panti, Yaba, Thisdaylive.com reports.

The CP had on Wednesday night through the Police Spokesman, SP Olumuyiwa Adejobi, issued a statement that suspects in all tactical squads under the command had been transferred to Panti.

But earlier that day, escaped suspects, who were arrested on grounds of armed robbery, kidnapping and murder, were said to have lured the station officer (SO) on duty to open the overcrowded facility.

The suspects were screaming at the top of their voices that they were in danger, and this lured the SO to open their cell and he was quickly overpowered by the detainees, who badly manhandled him.

THISDAY gathered that there was inadequate number of policemen at the squad complex to nab the escaping suspects because the former SARS operatives were on standby, waiting for instructions concerning their deployment.

With their withdrawal from duty, few mobile policemen were deployed to SARS building at the command to watch over the detention facility.

Having trooped out of their cells, some of the detainees invaded different offices and escaped with laptops and even some weapons like machetes recovered as exhibits, which they used to attack the few mobile policemen that tried to stop them.

Though the mobile policemen opened fire into the air to stop them in their tracks, about 30 of them escaped while the others were successfully rounded up.

Explaining why the compact SARS facility had such number of detainees, a police source blamed it on the COVID-19 pandemic.

According to him, because of the pandemic, the correctional centres in Lagos refused to accept new inmates over fear of spread.

The correctional centres were said to have insisted that the police take them for COVID-19 test before they can be admitted into the detention facility of the centre.

Given that the cost of the COVID-19 test would be borne by the command, the police opted to get a remand order and detain the suspects in SARS cell.

But debunking the allegation that the suspects escaped, the spokesman of the Lagos State Police Command, SP Muyiwa Adejobi said the information was mischievous and false.

He said: “The attention of the Lagos State Command has been drawn to a rumour making waves on the social media that some suspects of the disbanded SARS escaped from the cell at the Command Headquarters, Ikeja, Lagos State on Wednesday.

“The command perceives such rumour as unfounded, mischievous and baseless. It is an attempt to cause fear and panic in the minds of Lagosians, and distracting the command.

“In line with the directive of the IG, SCIID, has taken over the disbanded SARS and other tactical units’ buildings in Ikeja and other satellite offices across the state, including the suspects.

“It’s pertinent to state that some of the suspects, who have been convicted, have undergone COVID-19 test which is a prerequisite to accepting them into correctional centres; but the command awaits their results before further actions.

“The suspects in all the cases handled by the disbanded SARS are intact. The DCP Yetunde Longe, has temporarily relocated to the disbanded SARS building at Ikeja for thorough supervision and accountability of the taking over process.

“The command therefore urges the general public to regard the news as a rumour, baseless and mischievous to suit the intention of the originator(s) as the command is committed to reforming the policing system and providing adequate security for all in the state.”