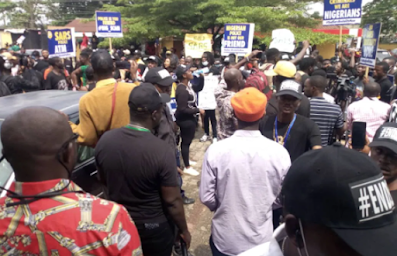 One of the male victims was shot dead while the other was macheted by hoodlums at Ring Road near the palace of the Oba of Benin.

It was learnt the protesters had converged on Ring Road, when hoodlums, who accused the protesters of preventing them from making money from daily issuance of tickets to commercial drivers, swooped on them with guns and machetes.

They dispersed the protesters after killing two of them.

The determined protesters, who scampered to safety, later massively regrouped and continued moving towards Benin and its environs.

They terminated the protest at Government House in Government Reservation Area (GRA).

Governor Godwin Obaseki condemned the attack on the protesters in Benin, while urging police operatives to ensure adequate security for them.