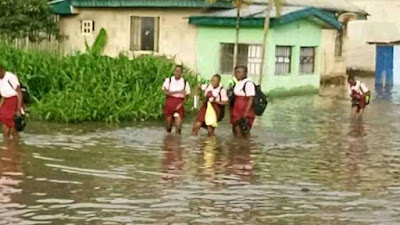 Following the devastation caused by flood, the Bayelsa Governor Douye Diri has directed the immediate closure of all primary and secondary schools across the state.

Diri said the decision was taken to avert further danger to lives.

He gave the directive after leading a team of his cabinet members and other government officials on an on-the-spot visit to some of the flooded communities in Yenagoa and Southern Ijaw local government areas at the weekend.

The Governor, who lamented the devastating effect of the flooding on the people and communities, said his administration would not abandon them at this time of need.

He stated as a concerned government, palliatives would be sent to victims of the disaster as a temporary measure.