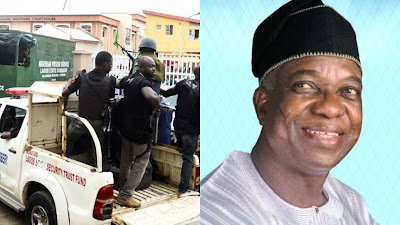 Rauf Olaniyan, the deputy governor of Oyo State, has revealed how some operatives of the recently proscribed Special Anti-Robbery Squad (SARS) extorted money from him in various currencies including naira, dollars and pounds in Lagos.

The deputy governor, while addressing the protesters last week, said that he was a victim of police brutality twice.

Mr Olaniyan, who spoke at the weekend, recounted how the special unit of the police collected money from him without being found guilty of any offence.

He said that on a particular occasion, while he was rushing to catch a flight, SARS operatives took all the monies he had on him (both local and foreign) and that even an appeal to them to spare him some to use when he gets to his destination fell on deaf ears.

He added that only reforms of the police will help address all the anomalies in the system.

“I was a victim twice, once at Ikeja roundabout and at Ojota ramp when you want to negotiate around Ikorodu road to the express.

“Ask my driver. We were ransacked there. What only saved me was the fact that I had some money with me. I had to part with over N100,000. It was terrible.

“That of Ikeja, they took pounds sterlings, they took dollar notes, all the money I had because I was travelling. I was eager to go and catch my flight, they emptied me.