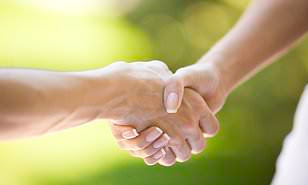 A Muslim doctor has been denied German citizenship after refusing to shake a woman's hand when she gave him his certificate.

The 39-year-old Lebanese national was on the brink of becoming a German after living in the country for 13 years, completing his medical studies and passing a citizenship test with the highest possible mark.

But he failed at the final hurdle after refusing to shake the hand of the female official at the ceremony in 2015, leading state authorities to deny him citizenship.

Five years later, a court has backed their decision - saying the man's 'fundamentalist' views were at odds with his integration into German society.

The man had moved to Germany in 2002 and lived there legally ever since, marrying a woman of Syrian origin about 10 years ago - promising her that he would never take the hand of another woman.

He started his application for citizenship in 2012 and signed the necessary paperwork vowing to uphold the constitution and reject extremism.

But the court in Mannheim said the handshake incident was incompatible with the constitution's guarantee of equality between men and women.

'If the applicant refuses to shake hands for gender-specific reasons which are incompatible with the constitution, there is no integration into German living conditions,' they said.

'This applies in particular if the refusal to shake hands with the opposite sex - as in this case - serves to further a Salafist conviction about the relationship between men and women.'

Germany has long held concerns about the fundamentalist Salafists, who make up only a tiny proportion of the country's Muslim population.

The man's refusal to shake hands with the official came from a belief that women posed a 'threat of s.e.x.ual temptation', the court said.

Since the start of 2018, the man has stopped giving handshakes altogether - but the court dismissed this as a 'tactical' step to improve his chances of getting citizenship.

The court said that handshakes had deep roots in Western culture, including as a symbol of reaching agreement.

'Handshakes are common greeting and farewell rituals that take place regardless of the social status, gender or other personal characteristics of the people involved and go back centuries,' the judges said.

While other greetings such as kisses and high-fives are also available, they do not come with the came sense of formality and legal validity, the court said.

The judges also predicted that handshakes would withstand the coronavirus pandemic, in which physical touching has been kept to a minimum to reduce infections.

The man can now appeal the decision to a federal court.