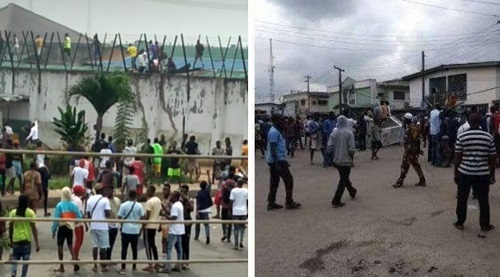 An update on the Monday’s jailbreak in Benin City showed that 1,993 inmates escaped from the Nigerian Correctional Centres in Edo State, the Federal Government has said.

The government said that besides freeing the inmates, those who attacked the facilities looted the centres, including the weapons in their armoury.

Providing updates on the incident, the Director of Press in the Ministry of Interior, Mohammed Manga said: “They came in large number, bearing dangerous weapons and attacked the officers on guard duty. They were unmistakable on their mission, which was to force the cells open, free the inmates and carry out other nefarious activities.

“Two Nigerian Correctional Service (NCoS) Custodial Centres in Benin City and Oko in Edo State were attacked yesterday by protesters purportedly under the #ENDSARS aegis, freeing (at the last count) 1,993 inmates in legal custody and looting the centres, including the weapons in their armoury.”

Manga, however, said in a statement that the situation has been brought under control while security in and around the custodial centres nationwide has been beefed up.

He added that investigation has commenced on the matter to determine the full impact of the attack.