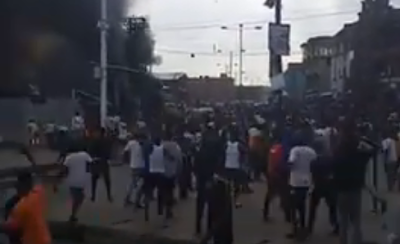 No fewer than nine persons have been reportedly shot as security agencies intensified efforts to enforce the riot by hoodlums in the streets of Akure and environs.

The hoodlums mounted barricades in several parts of Akure.

Witnesses said the nine persons were shot by security agents who were moving round the town to disperse the protesters.

The Nation gathered that the injured persons were rushed to various hospitals within the area for medical attention but no death was recorded.

The witnesses said the shootings occurred between Ilesha garage and Cathedral junction.

It was learnt that the hoodlums who were irked by the shooting marched on the Ondo Secretariat of the All Progressives Congress and torched the building after looting items such as bags of rice, laptops, plasma TV, chairs, tables amongst others.

Attempts by some hoodlums to set the Yaba police station in Ondo town on fire was resisted by policemen of the police command which made the hoodlums set a a new generation bank and set two vehicles ablaze.