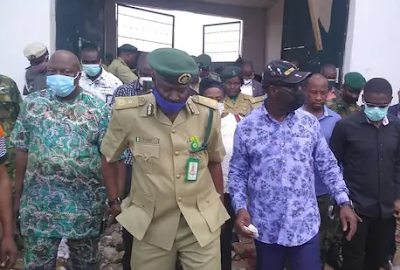 The Nigerian Correctional Service disclosed on Wednesday that 1,993 inmates escaped from the facilities.

The governor, who, in company with his deputy, Philip Shaibu, and other top police or military officers in the state, inspected the affected correctional centres and the police stations that were burnt in Benin City by hoodlums, who hijacked the #EndSARS protests, lamented the extent of destruction.

The governor said, “You will agree with me that this is not in the spirit of the #EndSARS protest. This is sheer criminality. The real protesters were focusing on the reform of our policing system and not to destroy government property, break into prisons and release inmates.

“So, you can tell that there were some criminal intentions behind these acts and the #EndSARS protest in Edo was hijacked by criminals and they used the opportunity to release their colleagues who were held in our correctional centres.”

He said, “We know that some of the inmates may have been released by their friends and others used the opportunity to get out of the facilities. We are using this opportunity to appeal to all inmates in our correctional services who have escaped to come back on their own before the close of business on Friday this week.

“If they come in and go to the Nigeria Police Force Command headquarters in Benin City, nothing will be done to them. However, those who do not report back after Friday night, we have all their records, we will go after them and appropriate sanctions will be meted against them.”