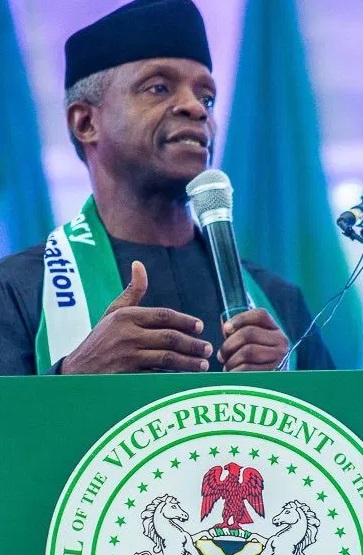 Some Nigerians have asked the Redeemed Christian Church of God (RCCG) to strip Vice President Yemi Osinbajo of his pastor title or compel him to resign.

On Tuesday, several #EndSARS protesters were killed by the Nigerian Army in Lagos.

The soldiers, after killing the protesters, were reported to have carried their corpses away to cover up the act.

The incident occurred hours after the Lagos State Governor, Babajide Sanwo-Olu, announced a 24-hour curfew in the state.

Shortly after the announcement, there was panic on social media after photos emerged of unknown men removing CCTV cameras at the Lekki toll gate.

At dusk, some unknown persons turned off all the street light, throwing the tollgate into darkness.

Soon afterwards, the military arrived and ordered protesters to go home after which they fired into the crowd.

Below are some reactions by Nigerians criticizing the Vice President on Twitter:

Pls dear redeemers boycott any redeem church activities whatsoever as a sign of protest until Yemi Osinbajo is strip off his pastoral cover.

It’s the least you can do for the lives of our gallant comrades killed in this mov’t.#EndSARS #EndSARSImmediately #StopNigeriaGovernment

One of your pastors and a member of the bar, Osinbajo has lead a killing spree of unarmed innocent citizens of Nigeria protesting only to stay alive.

One good Sunday after the dust settles, pastor/vice president,osinbajo will climb the pulpit at Redemption camp to tell you how good the Lord is and you will scream "Amen" at the top of your voice because your head is used to carry load.

Until Pastor Yemi Osinbajo is suspended, I am never stepping foot into any Redeem Christian Church of God. He has lost the grace to serve as cover of the life of saints pic.twitter.com/m8pG7yTisb