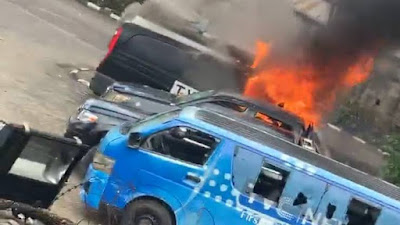 The headquarters of Television Continental popularly known as TVC in Ketu, Lagos which was attacked by hoodlums earlier this week, is now back on air.

Hoodlums had vandalised and set ablazed the station on Tuesday during violence that broke out from #EndSARS protests in Lagos.

Findings on Saturday revealed that the station is still battling technical glitches.

This is coming barely 24 hours after the head office of Nation newspaper which was attacked by the hoodlums resumed operation.

The recent attacks on private and government-owned properties in the state were triggered by the shooting of unarmed #EndSARS protesters at Lekki tollgate on Tuesday.

The two media establishments have been linked to the former Lagos state governor and national leader of the All Progressives Congress (APC), Bola Tinubu who is believed to be the target of the attacks.