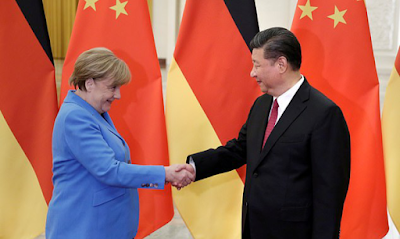 China is on the brink of 'world domination' and Europe needs to wake up to the danger, a former German spy chief has said.

Gerhard Schindler said Beijing was 'very cleverly' spreading its influence across Europe, Asia and Africa - warning that its technology is now so advanced that Germany cannot tell if it is being used for sinister purposes.

Schindler called on Germany to strip out Huawei from its 5G mobile network in order to make the country 'less dependent' on Beijing, echoing the US government's fears that Huawei could be used to spy for China's Communist Party.

Schindler also argued that Angela Merkel's decision to open Germany's doors to refugees in 2015 had left the country with a 'large reservoir' of Muslim men who could be vulnerable to 'radicalisation, recruitment and violence'.

European governments are under pressure from Washington to place curbs on Huawei, but Germany has so far stopped short of banning the company outright.

Schindler, who led Germany's intelligence service from 2011 to 2016, said Huawei could create so-called back doors in its 5G systems and 'we would have no idea what they were building'.

'It's as though an engineer specialised in steam engines were supposed to assess an internal combustion engine,' he said.

'You can imagine scenarios where we are in a crisis and the threat "We're going to turn your communication network off" would influence our decisions.'

Schindler said some degree of economic dependence on China was inevitable, for example in Germany's flagship car industry which sells more than 250,000 automobiles a year to Chinese buyers.

Trade between China and Germany was worth a total of €206billion (£186billion) in 2019, making it Germany's largest trade partnership.

However, Schindler said that 'we should strive to be less dependent' rather than seeing everything through the lens of 'business relations'.