Inmates Who Escaped From Prisons In Edo Rearrested For Robbery 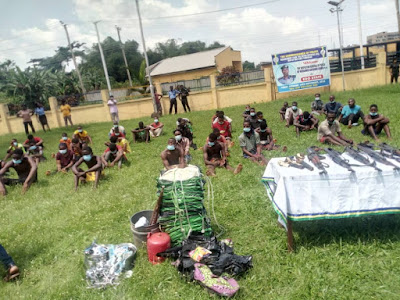 Six of the escapees were rearrested for alleged armed robbery while one was arrested for attempting to kill the prosecution witness who testified against him in Court.

He said Henry Atadi, after escaping from the prison, snatched a Lexus car and was arrested at Okada with the car.

He said they were arrested with the buyers after selling the car.

Speaking with journalists, Atadi, denied stealing the car, saying that he was only given a lift after they were set free from the prison by hoodlums.

He said: “After we were set free, I didn’t have money to go home.

“So, as I was waiting for a vehicle, someone gave me a lift but when we get to Okada, police stopped us and the man that carried us suddenly disappeared and I was arrested.”

Also, some of those arrested for stealing palliatives denied the offence, saying they were arrested for violating curfew declared by the state.