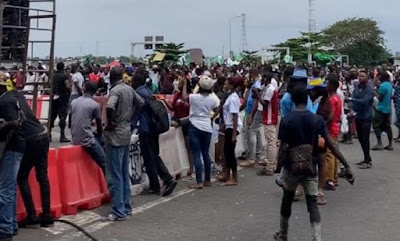 The Special Adviser to the President on Media and Publicity, Femi Adesina, has rejected the report by Amnesty International on the Lekki shootings.

Adesina, who is the President’s most senior spokesman, said on Thursday that Amnesty could not have more facts about the country than the Presidency which has a ‘helicopter view’ of things happening in the country.

Speaking on Channels Television’s Sunrise Daily programme, Adesina said the looting and rioting were not caused by the military shootings because there was already violence before the Lekki incident.

Responding to a question on the Lekki shootings, he said, “You are not quite correct. You are falling for the narrative of Amnesty International. And Amnesty is wrong. Anarchy had broken loose before even Lekki. The prisons in Benin and Oko had been broken open before Lekki. Orile police station had been burnt before Lekki.

“Amnesty International does not have all the facts, they don’t run this country, they shouldn’t know beyond what they have been told. They shouldn’t know more than you and I should know as media people as watchers of developments.”

When asked if it was the President’s thinking that Amnesty’s report was wrong, Adesina said the global watchdog had been known to always make unsubstantiated reports about Nigeria.

“Many times, the military has come out to dispute facts brought out by Amnesty,” he said.

When probed further as to whether the President approved the military action in Lekki as the commander-in-chief, Adesina said he would not want to undermine the work of the panel of inquiry looking into the matter.