Horrific! Girl Suffers Horrific Burns To Her Lips After Thugs On Bikes Throw Fireworks At Her 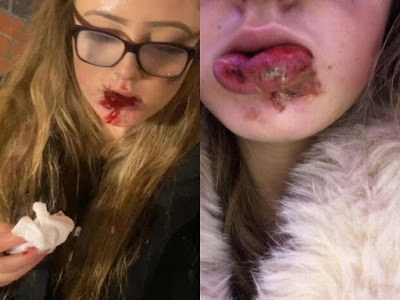 A 14-year-old girl suffered horrific burns to her face when thugs launched a firework at her.

Holly Kane's lip was burned to a crisp after 'boys on bikes' threw a pyrotechnic at her in Canada Water, London.

She was rushed to St Thomas' Hospital with swollen lips and cheeks and blood pouring from her mouth.

It comes after youths fired rockets and flares at diners in Canada Water over the weekend as part of a spate of anti-social behaviour near the station.

Holly's mum said the yobs are making residents' lives a 'nightmare' and turning the neighbourhood into a 'no-go zone', according to a report.

Holly, from Deptford, London, has described how boys on bikes came up behind her and threw a firework on the floor.

She said: "As I turned around this firework hit me on the face and it exploded.

"I sort of went unconscious because I couldn’t really hear properly. I was scared all my face was going to be scarred and that my teeth would be knocked out.

"I had blood pouring out of my mouth, it was so sore. I can’t move my mouth too much as it really hurts. I’m also scared it’s going to happen again and that I won't look the same as I did before."

Holly said the incident happened as she was walking towards a foot tunnel with her friend to get out of the rain.