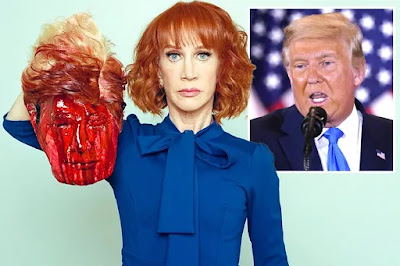 Comedian Kathy Griffin retweeted her controversial photograph showing the decapitated head of an effigy of Donald Trump after the President claimed victory in the election.

Griffin, 60, an outspoken opponent of the President who was best known for presenting the New Year's Eve countdown with Anderson Cooper on CNN, is seen with an expressionless look holding the head which is slathered in fake blood.

The controversial image, which Griffin said saw her investigated by the secret service, was posted shortly after the President prematurely declared he had won the 2020 Election at around 2am Wednesday morning.

The original picture, first posted in 2017 and taken by photographer Tyler Shields, faced condemnation from across the political spectrum and the 60-year-old said she even received death threats from Trump supporters in its aftermath.

She said she was approached by a man with a knife after the stunt which made her a Hollywood pariah, leading to her having metal detectors installed at her home.

Griffin initially apologized for the photograph but later revoked that statement and now stands by the photo and insists it was free speech.

At the time, the President himself said Griffin 'should be ashamed of herself', calling the stunt 'sick' and claiming that his young son Barron was 'having a hard time with this'.

Chelsea Clinton, the daughter of Bill and Hillary Clinton, called it 'vile and wrong' and said it was 'never funny to joke about killing a president'.

She had been the co-host of CNN's New Year's Eve broadcast for 10 years before she was fired in the aftermath of the photo.