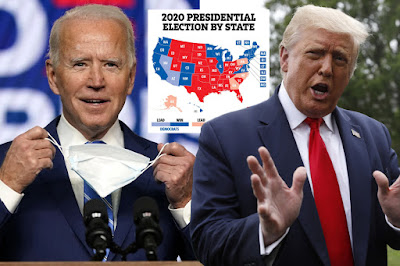 Donald Trump will never accept that he lost the election, even if his legal challenges fail.

Sources close to the White House say he will even refuse to attend the inauguration of a rival he sees as a 'phoney President', as he continues to protest that was cheated in a fraudulent vote.

'He has no concession speech ready and no intention of recognising Joe Biden's presidency,' one Republican source said last night.

The President spent hours holed up in the White House with a hardened core of loyalists spurring him on in his angry defiance of the result.

Insiders described the atmosphere inside the West Wing as 'manic, exuberant, energised and toxic', with some staff lighting rose-scented candles in an attempt to soften the environment – and to combat the smell of fast-food delivered to the President and his inner circle.

'His sons and closest aides have been egging him on while no one else dares raise the delicate matter that he has lost and needs to consider life post-presidency,' said a source. 'In his mind, he never looked past election day because he is superstitious and he thought it was bad luck.

'Now he's hell-bent on creating a narrative that the election was fraudulent and so Biden is not legitimate. He believes there was a conspiracy against him from day one of his presidency – with the Russian influence hoax, the fake impeachment and now the fake election.'