Breakdown Of The Fat Pension Received By Lagos State Ex-governors 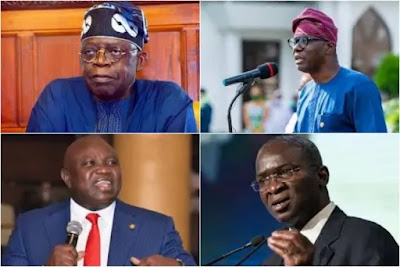 Governor Babajide Sanwo-Olu struck the right chord today when he announced he would submit a law very soon abolishing what critics have called the obscene pension package of former Lagos governors.

He said the move was necessary as state resources are dwindling.

The governor may also be doing so as the destruction of state assets by hoodlums in October will take many billions of naira to replace.

The pension law was passed by rubber stamp state assembly in 2007 as former Governor Bola Tinubu was ending his second term tenure.

Titled: The Public Office Holder (Payment of Pension) Law No 11 Official Gazette of Lagos State, 2007, the law has been copied by other states.

But states such as Zamfara and Bauchi have cancelled their own versions of the law.

And a court of law had ruled that that the law was illegal, as it is not in the constitution.

Beside, the Revenue Mobilisation, Allocation and Fiscal Commission, RMAFC said the governors are only entitled to 300 percent severance pay, as provided in Certain Political Office Holders and Judicial Officers Remuneration Act.

The Lagos pension law for ex-governors states that former governors of the state are entitled to a house each in any location of their choice in Lagos and Abuja.

This means Akinwunmi Ambode, a one-termer is not entitled to a house in Abuja, but he is entitled to one in Lagos.

Only Tinubu and Fashola qualify for two houses, one in Lagos and the other in Abuja.

The law also provides for six new cars every three years, 100 per cent of the basic salary of the serving governor (N7.7m per annum), as well as free health care for himself and members of his family.

The law also says former governors will be entitled to:

*Furniture allowance, which is 300 per cent of their annual basic salary (N23.3m);

*Car maintenance allowance, which is 30 per cent of the annual basic salary (N2.3m).

*A personal assistant, who will earn 25 per cent of the governor’s annual basic salary (N1.9m).

According to the law, the former governor will also be entitled eight policemen and two officials of the Department of State Services for life. The state will bear the expenses.