Sowore Says His Life In Danger, Marked For Arrest Or Murder 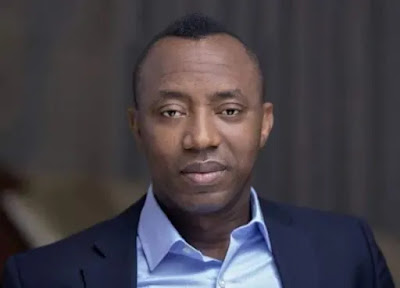 Publisher of Sahara Reporters and convener of #RevolutionNow campaign cried out on Wednesday night that he has been marked out to be either arrested or assassinated.

Sowore was arrested last year November and later charged with treason, for calling out a nationwide march against the government.

The trial has gone through fits and starts.

The activist and former student unionist, who contested the 2019 election is now under bail but restricted to Abuja.

In a series of tweets, he said he has information that the Defence Intelligence Agency of Nigeria has put a bounty on his head.

According to him, the agency, which is the primary military intelligence agency of the country, wants him to be “arrested or murdered” in the next 24 hours, if he resisted arrest.

“This is from the Defence HQ here is Abuja! Be it known that this can’t affect the struggle for freedom”, he wrote defiantly.

“Over the week their minions wrote press releases, letters to foreign embassies, @TheNationNews was generous in claiming some “Genuine EndSars” people want me arrested. The @HQNigerianArmy had a team of @twitter influencers on Sunday suggesting I should be assassinated”, he said on Twitter.

In an update, he doubled down on the accusation, claiming that the plot to arrest him or terminate him has been hatched for weeks.

“The plot against me has been on for weeks now, and I’ve been aware until the signal sent to security agencies leaked tonight. The is a businessman linked with the @mbuhari regime who’s threatened me for weeks unending since #endsars started.

“The @policeng team dispatched to the NASS on Friday opened fire on me and stole one of my vehicles, they refused to return it even it was meant for PRESS duties. The FCT Police Commissioner, Bala Ciroma told me the car committed a crime and will be charged. It was shocking”.

The DIA has not reacted to the serious allegation.