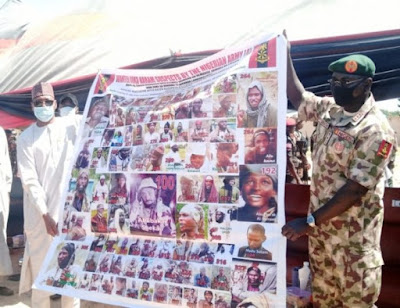 The Nigerian Army has declared 81 terrorists of Boko Haram and ISWAP wanted.

At the top of the pictorial list are Abubakar Shekau and Abu Al-Barnawi.

The army also announced that it has co-opted more Civilian Joint Task Force (CJTF) members into its operation.

A banner showing photographs of the wanted terrorists was unveiled by Governor Babagana Zulum of Borno and the Chief of Army Staff, Lt.-Gen. Tukur Buratai.

The ceremony was held on Wednesday at the CJTF Super Camp Chabal, near Maiduguri.

The army did not indicate whether it will reward informants. But the United States since 2012 placed a bounty of $7million on Shekau.

Apart from Shekau and Barnawi, other terrorists listed in the army poster are Ibrahim Maryam and Abu Sulum.

Some of the wanted terrorists on the current list had been on the watch list since 2016, while others were declared wanted for the first time.