18 Years Old Girl Elopes With Her Boyfriend In Lagos [Photo]


The police in Lagos are on the trail of a teenage girl, Taiwo Olakunle, pictured above, who allegedly ran away from home and is believed to be with a suspected lover. Olakunleâ€™s case is the second of such in six weeks. 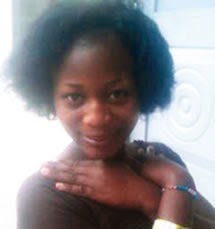 One 13-year-old Ezennia Chikwuo had also left her house on Ishola Bello Close in the Alausa area with a man, believably her lover, and had since not returned.

PUNCH Metro gathered that 18-year-old Olakunle, who was staying with her auntâ€™s family, the Lawals, on Adeosun Street, Balogun in the Iju area of Lagos, had only been brought from Ondo State in July 2014.

salon. However, on November 11 while at the salon, she was reportedly beaten up by a gang of street boys who claimed she intruded into their discussion.

The matter was reported to the Iju Police Division, and the police arrested Olakunleâ€™s suspected assaulters.

Our correspondent learnt that on the following day, however, when she came back from a hospital, she was said to have packed her belongings and sneaked out of the house with a man, believed to be her lover, who had yet to be identified.

PUNCH Metro learnt that when the family that Olakunle was staying with noted that the teenager was missing, they reported the matter to the police at Iju.

On Monday when their correspondent visited the Lawals, the aunt, Ola Lawal, lamented that they had searched everywhere for the teenager all to no avail.

She added that in the course of investigation, the police arrested her and her husband and detained them for two days.

She said, â€œTaiwo (Olakunle) is my niece. Her parents are dead. She was just staying idle in our town in Ondo State and I decided to bring her to Lagos. I enrolled her at the hairdressing salon two months after she arrived in Lagos.

â€œOn November 12, she came back from treating herself at the hospital. The men who beat her up said she was intruding into their discussion, but the police arrested them and charged them to court.

â€œWhen she came back that November 12, some people said they saw her pack her things and walk out of the compound.

â€œThey said they saw a motorcycle rider pick her up and zoom off. That was the last time we ever saw her. She was already doing well in the hairdressing vocation, and her boss liked her. All the time she stayed with us, we did not allow her to indulge herself. I still cannot believe a girl who does not know Lagos will disappear like that.

â€œOn December 22, the police at Iju even came to arrest my husband and me. We slept in the cell and were released the following day because it was alleged that we were hiding her.â€

The husband to the aunt, Mr. Ibrahim Lawal, told our correspondent that about a week ago, two neighbours said they saw the girl in separate locations with men.

He said, â€œWhen one of our neighbours came on a visit and heard about Taiwo, she said she saw her at Katangowa Market in the Abule Egba area buying some clothes with a man. She said she did not call out to her because she was not aware the teenager was being searched for.

â€œAnother person told us he saw her on another evening in the Alagbado area going out with a man.This girl should have mercy on us and return home. If she wants to get married, let her inform us officially and then go.â€

When PUNCH visited the hairdressing salon where the teenager was an apprentice, the boss, Mrs. Tosin Bada, noted that there was only one instance when a man came to flirt with Taiwo, and she had sent the supposed lover away.

The Lagos State Police Public Relations Officer, DSP Kenneth Nwosu, confirmed the incident. He urged those who saw the teenager to report to the police at Iju.

He said, â€œTaiwo Olakunle is about four feet tall and fair in complexion.

â€œIf seen, the public should contact the Iju Police Station.â€