Oil Well Fire That Raged India, That Experts From US, Canada Had To Come In Is Finally Put Out After 5 Months 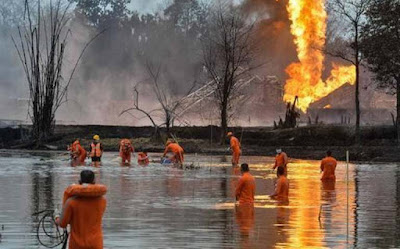 A massive oil well fire that raged for more than five months in northeast India has finally been extinguished, officials said Sunday.

Oil India engineers had battled the blaze in Assam state since an explosion in June, weeks after the well blew out and began discharging huge quantities of natural gas.

Two employees of the state-owned company died in the blast, which sent a wall of flame and massive plumes of smoke into the sky.

A third worker died in September after an accident at the site.

Experts from Singapore, the United States and Canada joined efforts to contain the inferno, and Oil India spokesman Tridiv Hazarika said Sunday the fire had now been “doused completely”.

“The well has been killed with brine solution and is under control now,” he told AFP, adding that the well had yet to be capped.

“There is no pressure in the well now and it will be observed for 24 hours to check if there is any amount of gas migration and pressure build-up,” Hazarika said.