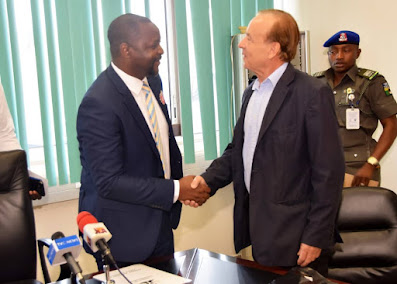 Nigeria’s Minister for Youth and Sports Development, Sunday Dare has questioned the performance of the Super Eagles in their recent matches.

The Super Eagles on Friday blew their four-goal lead against Sierra Leone to draw 4-4 and failed to impress in a second leg match against the Leone Stars. The match ended goalless.

Dare in response to these performances has taken on head coach, Gernot Rohr questioning his sustainability and competence.

The minister said that Nigerian football deserves better and threatened that the needful would be done.

“The performance of the Super Eagles from their last two matches calls to question the suitability and competences of Technical Adviser, Rohr, Nigerian football deserves better. The needful will be done,” Dare tweeted.

He concluded by apologising to all football lovers for the national team’s sloppy performance.

Rohr has been under fire since the Eagles’ disappointing outings at the Samuel Ogbemudia Stadium and later at the Siaka Stevens Stadium with football lovers insisting that the Franco-German be sacked as the national team coach.