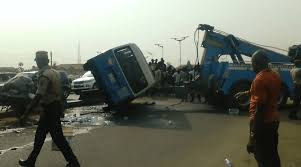 The incident, it was gathered, happened after the bus, which was being chased by another vehicle, veered off the road and rammed into roadside traders and passersby.

A female petrol attendant close to the scene of the incident told Punch Metro on Sunday that a heavily pregnant woman was among the victims.

She said, “The incident happened around 6pm on Saturday. The bus was on top speed when the driver lost control and hit some people standing beside the road. One pregnant woman and two traders were badly injured.

“The pregnant woman was on the ground motionless for a long time, before she was later rushed by people to a hospital. The two other people were also taken to the hospital.”

A tricycle rider, who did not also identify himself, told our correspondent that one of the victims he rushed to a nearby hospital was later confirmed dead.

He said a sharp object pierced through the neck of the victim.

“The bus driver came from Eliozu area. I guess another driver he offended was chasing him and in the process he lost control of the steering and hit some traders and other people standing by the roadside.

“A girl I tried to save by rushing her to a nearby hospital was confirmed dead. After the accident happened, the driver came out of his bus and rushed to the vehicle that was chasing him and seized the driver’s car key before policemen from Okporo division came and arrested them,” he added.

The state Police Public Relations Officer, Nnamdi Omoni, confirmed the incident, adding that the drivers were in custody.    ,,