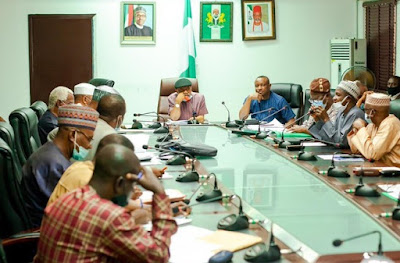 The meeting between the Federal Government and the organised labour on the hikes in fuel pump price and the electricity tariff on Sunday ended in confusion as the labour leaders walked out of the parley in anger.

The dialogue which was meant to take updates on the implementation of resolutions reached during the three previous meetings ended abruptly barely 10 minutes after it commenced at the Presidential Villa banquet hall, Abuja.

The meeting had started at 8.18pm when the Trade Union Congress President, Quadri Olaleye, raised the issue of the latest hike in fuel pump price from N160 to N170.

He insisted on the reversal of the hike before the meeting can proceed. Olaleye said, “Government is showing a high level of insincerity in discussions with us and is also putting us at risk with the people we are leading, with the masses. We find it difficult to move freely but the people in government are moving freely.

“I came to the conclusion that the major problem we have in this country is insincerity and this cannot continue.

“So, I want to put it to the government that if today’s meeting does not look promising to solve those problems, honestly, we would mobilise to walk out of the meeting. The situation is getting tense and you are putting us at risk.”

Speaking in a similar being, the Deputy President, Nigeria Labour Congress, Joe Ajaero, also said the union had been under attacks over the slow pace of implementation of resolutions reached at the meetings with the government.

But the Minister of Labour and Employment, Chris Ngige, assured that the issue would be discussed during the business session and asked the media to leave the hall.

However, as soon as journalists were out of the hall, Ngige reportedly said the issue of palliatives would be discussed first while the labour leaders insisted on discussing the fuel pump price hike.

Addressing journalists outside the hall, the NLC General Secretary, Emmanuel Ugboaja, said the union leaders stormed out of the session because the government team was not willing to address the latest hike in fuel pump price which he said violated the understanding they had with the FG.

He added, “We felt we should address the issue of petroleum prices before whether there is need for palliatives or not. On that strength, we felt we could not continue with the meeting whose agenda is wrongly prioritised.”

But Ngige said nothing went wrong.

“We felt that the item of increase in petroleum, having been listed at all as an additional item, would have satisfied everybody but they on that said they were calling for a recess. It is for me to re-invite them and I would do that within 24 hours,” he said.