Scores of supporters at an All Progressives

Congress rally in the Oworonshoki area of

the rally, stabbing two youths in the process. 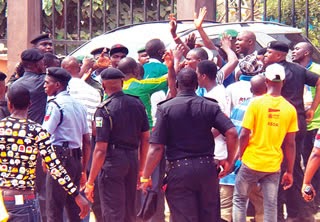 WAPBAZE learnt that the violence was

caused by a supremacy battle between two

rival cults based in the Bariga area of the

A correspondent, who witnessed the

incident, observed that policemen folded their

arms as the thugs unleashed mayhem.

Journalists, who were covering the event,

clustered on the platform to avoid being

caught in the crossfire.

The thugs did not seem disturbed as the

violence continued even while Governor

Babatunde Fashola was delivering a speech

alongside leaders of the APC in the Kosofe

Local Government Area of the state.

One of the youths that was attacked

attempted to escape, but he was surrounded

by assailants and stabbed with a knife and

hacked with a cutlass.

As the victim still struggled to escape, he was

pushed to the floor and trampled upon by

It was observed that after stabbing the two

youths, the thugs who thought they were

Minutes later, however, policemen and

officials of the Lagos State Traffic

Management Authority were able to revive

the injured youths who were rushed to a

It was noted that after the fighting had ended,

some supporters still refused to return to the