Family Of Three Wiped Out In Fatal Accident In Edo 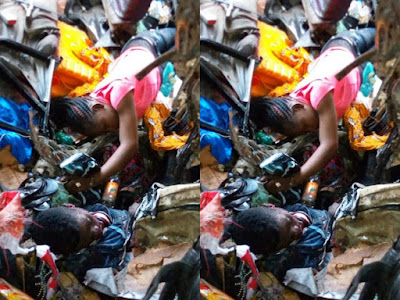 A family of three, was on Monday morning wiped out in a fatal auto crash that occurred along the Benin-Auchi expressway.

The deceased, a father, his wife and their infant were said to be heading towards the Auchi end of the road when the vehicle, a Toyota Camry, in the wee hour of the day when they rammed into an abandoned articulated vehicle right in front of CocaCola Bottling Company.

A neighbour who identified himself simply as Osarenren, said that he was sleeping at about 3 am when he was jolted from his bed by a thunderous noise.

Osarenren who said he quickly dressed up and dashed to the road, added that his heart skipped when he saw the mangled vehicle which was crushed under the full weight of the vehicle loaded with CocaCola products.

He said that they have for long appealed to the bottling company to vacate their trucks from the road but to no avail.

Osarenren alleged that authorities of Uhunmwode local government area of the state where the community is located, had a long time ago given land for parking of articulated vehicles to the company, but the drivers still park on the highway.

He said that the remains of the victims have since been deposited at the nearby White Cross Hospital, Ogueka, suburban Benin while frantic efforts were being made to locate the family of the deceased.

Edo State Sector Commander of the Federal Road Safety Commission (FRSC), Mr Henry Benamaisia, in a telephone conversation with journalists, said that he was yet to be briefed of the fatal auto crash.