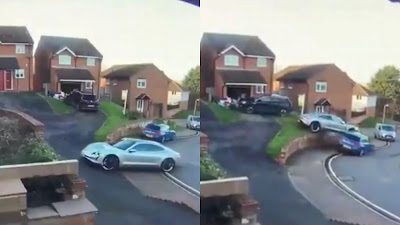 This is the devastating moment a Porsche driver accidentally crashes over a wall while trying to park the vehicle.

CCTV footage of the incident in Manningtree, Essex, has gone viral on social media.

The driver of the car - a Porsche Taycan - is thought to have accidentally accelerated, the Sun reports.

A neighbour told the Sun Online that the driver was visiting a resident when the incident occurred.

He told the paper: “I heard it and went to offer some help to make sure he was ok. Luckily, there were no serious injuries.

"I heard it happen, it was a loud crashing noise. He was pretty shaken up. He had a few bumps and bruises, but he was ok.

"He seemed like a really nice, genuine guy and he'd just smashed up his new Porsche."

A neighbour's CCTV shows the car being driven up a sloped driveway before it stops for a moment.

The car then surges forward and collides with a 4x4 parked outside a house at the top of the steep drive.

But the Porsche carries on and heads over a wall and collides with another car before ending up wedged between both.

One person commented: "The Porsche Taycan is known for its harsh acceleration..."

Another replied: "It's hurting me thinking how expensive the fixing cost."

Motoring journalist Adrian Padeanu said the powerful car's 'instant torque' could have been the "culprit".

On Motor1 he wrote: "The driver might’ve stepped on the “gas” pedal a bit too much and the Taycan’s electric motors did their thing.

"After all, even the base 4S has an instant torque of 477 pound-feet (647 Newton-meters) of torque. Porsche has launched a lesser single-motor version with rear-wheel drive, but this car riding on the Mission E concept's wheels can’t be it since it’s only available in China for the time being.