Aregbesola, Governor Oyetola Being At ''loggerheads'' Finally Makes It To The News 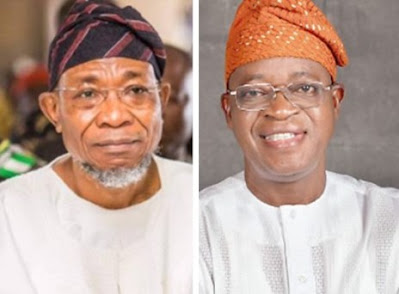 The aides of Governor of Osun State, Adegboyega Oyetola, and his predecessor, Rauf Aregbesola, on Monday differed over plan by some loyalists of the Minister of Interior to hold 10th anniversary of progressive governance in the state.

Mr Sola Fasure, an aide to Aregbesola, had told newsmen that the minister would be in the state to carry out the presidential directive that all cabinet members should return to their respective states and engage the governor, youths, and other critical stakeholders on the issue of security challenges facing the country.

He added that the visit had coincided with the 10th anniversary of the return of the All Progressives Congress administration in the state.

He said, “The minister is coming principally to carry out the presidential directive that all cabinet members should go back to their respective states and engage the governor, youths and other critical stakeholders on the issue of security challenges we face in the country, especially on #EndSARS.

“He has written to the governor to inform him that he will be in Osun and that his coming coincides with the 10th anniversary of the return of the All Progressives Congress administration in Osun.

“Aregbesola spent eight years and handed over to Oyetola, who has spent two years now and was part of the first eight years. Oyetola was a frontliner in the administration as the chief of staff. This makes the total of 10 years.”

But the Chief Press Secretary to the governor, Ismail Omipidan, while reacting, insisted that Oyetola and the leadership of APC did not have any idea of the programme being planned by Aregbesola’s men.

“Neither the party nor my principal was aware of the proposed celebration of 10th year anniversary of the All Progressives Congress in Osun State. The only thing I know is that we are planning our second year anniversary.

“I am a member of the committee. The party in the state also has representatives in that committee. There is no such programme in our lineup,” Omipidan said.