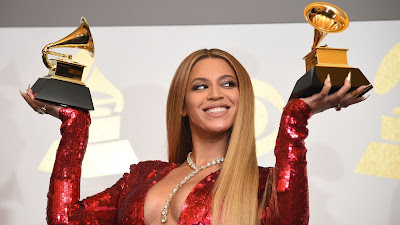 Beyonce is going for gold at the 63rd annual Grammy Awards in 2021 after leading all artists with nine nominations, including 2 for Record of the Year.

"Black Parade" and "Savage" (Remix) with Megan Thee Stallion has landed Beyonce a double mention in the top category, while the former will also compete for Song of the Year, as well as Best R&B Performance and Song.

"Black Is King," the visual accompaniment to The Lion King: The Gift - the superstar's soundtrack for her 2019 Disney remake, is shortlisted for Best Music Film, and "Brown Skin Girl" is up for Best Music Video.

Additionally, the "Savage" (Remix) is nominated for Best Rap Performance and Song.

The nine nominations make Beyonce the most-nominated female artist in Grammy Awards history with 79 over the course of her career, during which she has won 24.

The 2021 Grammys look to be a big night for the ladies with Dua Lipa, Taylor Swift, Brittany Howard, Phoebe Bridgers, Fiona Apple, Jhene Aiko, and Billie Eilish among the multiple nominees.

Comedian Trevor Noah will host the Grammy Awards on January 31.