This according to John took place in Port Harcourt, Rivers state on Saturday, November 21, 2020 at about 9:40am.

Narrating how it happened to Civil Rights Activists on Tuesday November 24, after being discharged from hospital, John said he works for Julius Berger Nigeria Limited and the assault happened when he wanted to park his water tanker.

According to him, he was on duty on the faithful day. And as he was about moving to his water filling spot, he noticed a private car was parked close to it. He tried to notify the driver but the owner won't wind down. He then bent his head to talk to the driver that was when one man whom he identified as Duncan Mighty allegedly struck his head using a traditional staff.

The second strike came but he blocked it with his hand. He said before he knew what was happening the driver had sped off and left him with blood all over his face.

Confirming the incident a Facebook user, Ndubueze Obodowhuo accused Duncan Mighty of using his status to intimidate his people. He also shared medical report of the incident... What he wrote;

"This is Mr. OKABAM JOHN a native of Elele town in Ikwerre LGA of Rivers State, he's currently employed by JULIUS BERGER NIG.PLC in Port Harcourt  and his service engagement is within Judges quarters elelenwo-street, GRA Port Harcourt.

"According to Mr. OKABAM JOHN a Water-tank driver with Julius Berger, Tanker number - B8751, On Saturday 21st of November 2020 at about 9:40am while he was on duty. A private car was parked close to his water filling spot, he tried notifying the driver who refused to wine down, he bent his head to talk with the driver surprisingly, it was Duncan mighty.

"Before he could explain, his head was struck by Duncan mighty using a traditional staff(Elephant tusk), the second strike was blocked with his hand. He(Okabam John) didn't see how the artist drove off because, blood covered his eyes at that moment.

"Mr. Okabam John narrated this incident after being discharged from the hospital. Duncan doesn't show up when he's publicly needed, rather he uses his VIP influence to undo his people. Celebrities should be celebrated by their positivity, their influence shouldn't pose danger to the society rather it should serve as liberation to the people.

"Mr. OKABAM JOHN is calling on the management of Julius Berger, Security Agents and Human Rights Organisations for justice to be done in his case, to avoid a re-occurance." 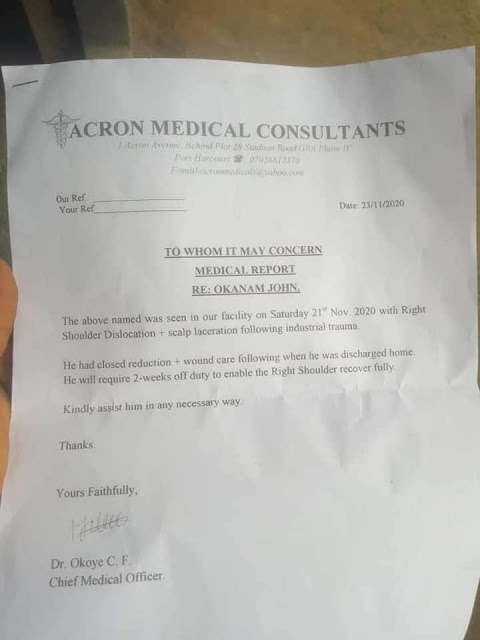 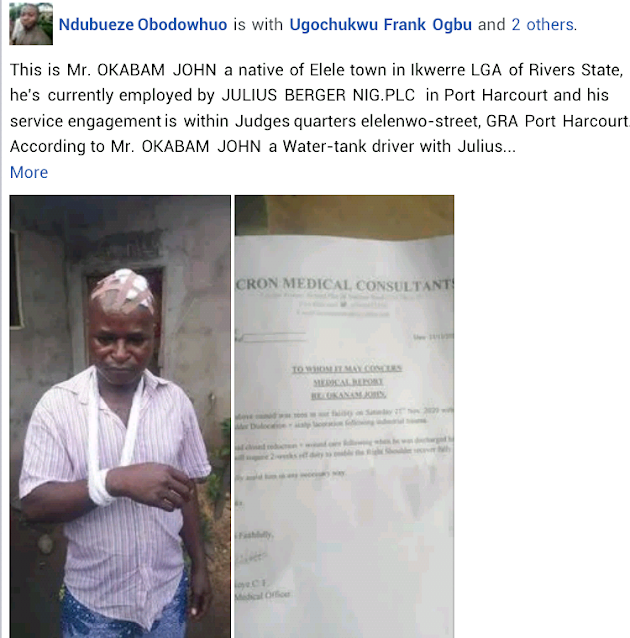