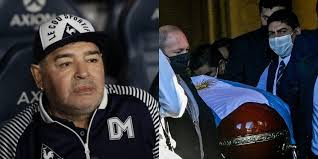 A funeral home worker was fired after taking a picture of himself next to the open coffin of the late Diego Maradona, according to Mirror Sport.

Maradona, the Argentinian soccer legend, died Wednesday at the age of 60 after suffering a heart attack.

The worker was supposed to be preparing Maradona’s body for the wake, according the report. Instead he reportedly stopped to pose for a picture with a thumbs up next to the coffin. The English tabloid opted not to run the disturbing photo.

The owner of Sepelios Pinier funeral parlor in Buenos Aires told local media the employee had been fired. Tributes have been pouring in for the football giant all over the world.