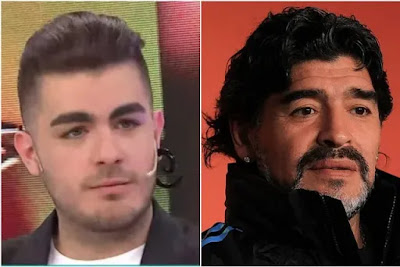 A teenager who claims to be the illegitimate son of Diego Maradona has formally demanded that his body be exhumed.

Santiago Lara, 19, lodged the request with a family court in the Arginitinan city of La Plata, just two days after the football legend’s death.

Maradona, who is considered one of the greatest players of all time, died on Wednesday, at the age of 60, after a reported heart attack.

Mr Lara’s lawyer Jose Nunez wrote to the court asking that the footballer’s remains “urgently” be dug up so that DNA tests can be carried out.

The 19-year-old has spent years fighting to prove his identity, after discovering his alleged paternity when he was just 13 years old.

Speaking to local broadcaster Telemundo on Friday, Santiago explained that his mother, Natalia Garat, was a young model when she met Maradona.

At the age of 23, after falling ill with lung cancer, she told her partner, Marcelo Lara, that Santiago was the son of the world-famous sportsman.

Days before her death, when her son was just three years old, she confirmed her suspicions to a group of lawyers.

However, Santiago did not discover the bombshell himself for another 10 years, when he spotted a magazine featuring a picture of Maradona with his own face, pixelated, underneath.

“I was shocked, I didn’t understand,” he told Telemundo’s Suelta la Sopa programme.

“I called my dad (referring to Marcelo Lara) and asked him about it. He told me everything. I was 13 years old.”

Maradona’s lawyers had requested a private DNA test at the time but none was carried out, Santiago explained.

Last year, Santiago’s story went public when the footballer’s lawyer Matías Morla said it was possible the young man could be his client’s son.

The teenager said the admission had made him “very happy” but he still wanted legal proof.

Asked if he was aware of the turmoil his exhumation request would call among Argentinians and Maradona fans worldwide, Santiago said yes.

He stressed that the move was not financially motivated, adding: “I just want to know who I am.”