I Received Vision That I Would Be Osun State Governor – Oyetola 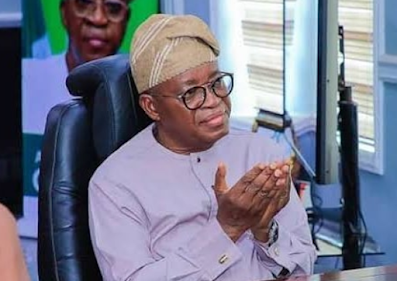 Osun State Governor, Adegboyega Oyetola, has said he received a vision from God that he would be Governor long before he joined the race.

He said this while addressing a congregation at a service held to commemorate the second anniversary of his administration at the Redeemed Christian Church of God, Osun Province 1 Headquarters, Osogbo, on Sunday.

Oyetola explained that after the divine encounter he had in his dream, he could only remember the last line of the song that was revealed to him.

He said, “I am ordinarily not one who sees visions but on two occasions, I had a strange encounter. Imagine the son of an Imam, receiving a Christian song in a dream.  That was my encounter.

“All I could remember on both occasions was the last line of the song which says ‘IleriOluwa ni lati se’. Outside of that dream, I had never heard the song before. When the impression was heavy on my heart, I called one of my friends to ask him about the song, and he told me the song was the Track 2 of Timi Oshikoya’s album.

“He went out and got me the album and immediately I started listening to the track, my consciousness was restored and then I had an understanding of what God was saying to me. That revelation has continued to give me confidence of victory each time I am faced with legal and political battles since becoming governor.”