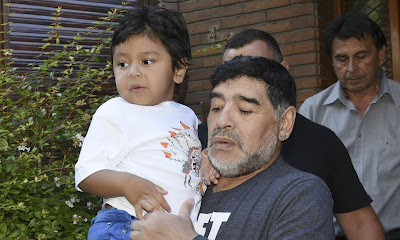 Diego Maradona recorded a heartbreaking message about his 'angel' youngest son hours before his death, it has emerged.

The football star asked the stepfather of his son to take good care of the seven-year-old.

In the recording, he told Mario Baudry, the boyfriend of his son's mother: 'Look after her and look after my angel, who is incomparable.'

Maradona is survived by five children, including his daughters Dalma, 33, and Giannina, 31, by his first and only wife Claudia Villafane, 58, to whom he was married from 1984 to 2004.

He had his youngest son Diego Fernando with his long-term girlfriend Veronica Ojeda in 2013, while he only acknowledged Diego Junior, 34, and daughter Jana, 23, in the last five years, both born after short flings.