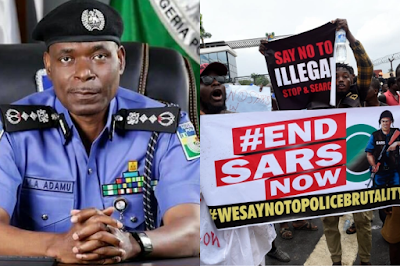 The Inspector-General of Police, Mohammed Adamu, has denied ordering or giving permission to a suit filed by the police challenging the constitutionality of the judicial panels set up by various state governments to investigate police brutality.

Mr Adamu has, therefore, queried the legal officer of the police over the filing of the suit, an official said Thursday.

The police made this known in a statement by its spokesperson, Frank Mba, on Thursday evening.

Several media organizations had reported that the police filled a suit at the Federal High Court, seeking to disband the panel’s nationwide.

According to a report by The Cable newspaper, the suit with file number FHC/ABJ/CS/1492/2020, sought to quash the panels across all states.

The panels were constituted nationwide to look into allegations of human rights abuses by the defunct police squad, SARS.

The constitution of the panels was one of the major concessions granted by the government to #EndSARS protesters in October.

Many state governments have since set up the panels and hearing has since begun.

Mr Mba in his statement said Mr Adamu has since launched an investigation into the origin of the suit.

He said the police chief has also vowed to sanction whosoever is behind the suit.

“The Inspector General of Police, IGP M.A Adamu, NPM, mni has directed immediate investigations into a suit purportedly challenging the legality of the States’ Judicial Panel of Inquiry, investigating allegations by citizens against officers of the defunct Special Anti-Robbery Squad (SARS),” he said.

“The IGP, who gave the order on the heels of trending reports in the media, today 3rd December, 2020, expressed the disapproval of the Force Management Team on the matter and ordered investigations into the alleged role of the Force Legal Section including its Head.

“Meanwhile, the Force Legal Officer has been queried and may face further sanctions if found guilty of dereliction of duty.

“The IGP reiterates the commitment of the Force to fulfilling all its obligations with regards to the disbandment of the defunct SARS, the ongoing Judicial Panels and all other police reforms,” he said,