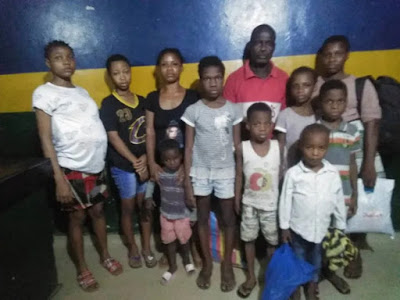 The Ogun State Police Command on Thursday said it has discovered another baby factory home in Mowe town of Obafemi-Owode local government area of the state.

The command’s public relations officer, Abimbola Oyeyemi, made this known in a statement, adding that the discovery of the home located at Lagos Street, Adesan in the town, followed a complaint from concerned residents of the area.

He said the residents had informed the police at Mowe divisional headquarters that a particular building in their area was strongly suspected to be a baby making factory, as most of the women seen there were always with pregnancy and whenever they delivered, they hardly see them with babies.

Mr Oyeyemi said the complainants stated further that from their observation, the babies are being sold.

The DPO Mowe division, Marvis Jayeola, led his men to the area where a man, who is suspected to be working for the operator of the home, was arrested with four women and four children.

He said one of the women is heavily pregnant while another is said to have just delivered a baby, which has been sold.

He also added that preliminary investigation revealed that the home is linked to a woman, Florence Ogbonna, who had earlier been arrested for a similar offence with her case pending in court.

The Commissioner of Police, Edward Ajogun, has ordered a manhunt for Mrs Ogbonna, and also ordered the case be transfered to the anti-human trafficking and child labour unit of the State Criminal Investigation and Intelligence Department for further investigation.